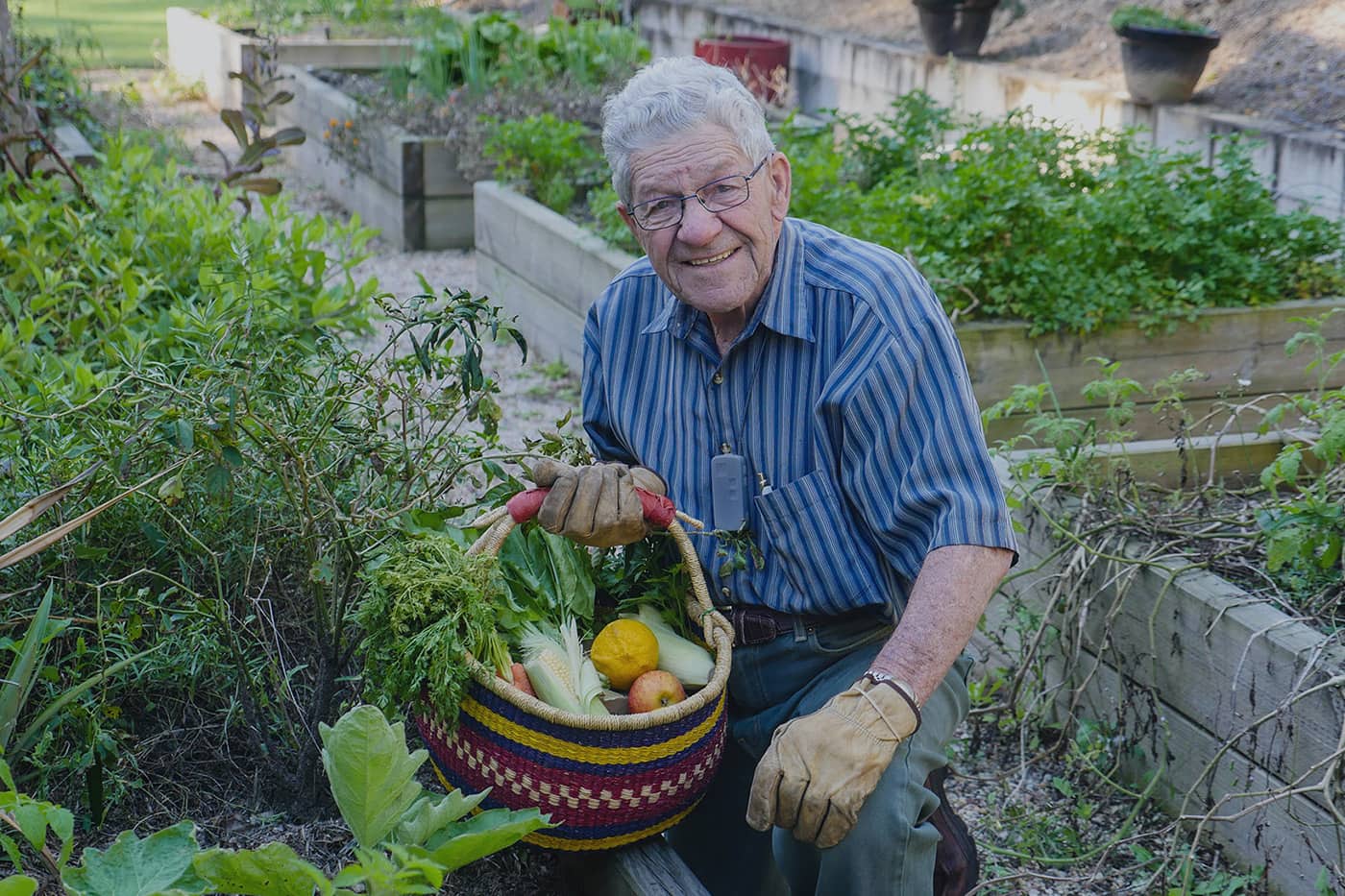 At 84, Arthur Schultz is more active than many people in their 20’s. Comlink Australia promotes independence and well-being for ageing people and Arthur stands out as the epitome of what we want for the people in our community.

When I arrived at his home to interview Arthur, early on a warm Tuesday morning, Arthur was already outside working in his garden.  The property is seven acres of flat green grass, rainforest and gardens that he has grown himself. Originally purchased in 1991, the block was fully timbered at the time but was just what he was looking for. Being in earth-moving meant Arthur could prepare the land himself and have the opportunity to analyse the land, take notice of where the sun came up and position the house accordingly. Now his property is rich with gardens, trees and grass and offers an outlook he says he never gets sick of.

The first thing you notice about Arthur when you meet him is his positive demeanor, which will be something of a theme throughout this story.  He describes his living situation as ‘perfect.’ His home for the last 27 years has become very important to him, and remaining there is a priority.

“As long as I can look after myself I want to live in this place. I want to die here if I can. If I ever get to the situation where I need help, I’m willing to accept that. But until such time I will strive to enjoy living here and looking after myself.”

Even living on his own, and on acreage, he manages and maintains the property by himself. From mowing, to gardening, his lifestyle involves a steady routine of what most people would call ‘hard work’. But Arthur sees it differently.

It’s not always easy though, Arthur admits. Some jobs around the house have become difficult.

“Eventually you get around to them. You run out of other things, so you’ve got to go do it.”

I wanted to learn more about him, his life and see what insights he could offer us all to learn from. By Arthur’s age, most people are too frail to do much of anything. So what’s his secret? In our conversation Arthur mentioned five things that he felt contributed to his health.

1. Eating Healthy – This should come as no surprise, but first on the list was eating healthily. It should go without saying, but nutrition and diet has a huge impact on our health, especially into old age. Arthur articulated his philosophy on eating as from ‘plant to plate.’ He grows cherry tomatoes, avocados, bananas, different herbs and more in his garden. Rather than live out of a tin, he will go to his garden, pick something off a plant, and take it inside to prepare and eat it.

“I was not really a gardener and my wife wasn’t a gardener. It’s only really since I retired that I got interested in gardening. Gardening is something you’ve got to learn. It becomes exciting when you start to grow things. To put a seed in a pot and there’s nothing there for four or five days and all of a sudden there’s a little leaf sprouting, that’s exciting.”

With a day full of activity ahead, it’s no surprise that Arthur starts his day with a healthy breakfast.

2. Stay Active – Another one that should come as no shock is to stay active as much as possible. Even now at 84, Arthur spends his day from the moment he wakes up, until the sun goes down, working around his property.

“I usually like to get up at daybreak, whenever that is. I’m ready to go. God has blessed me with good health so I can hop straight out of bed and away I go.”

Away he goes indeed. In fact, unless it’s raining, Arthur starts each day with a two kilometre bike ride after he’s had breakfast.

“I used to walk years ago. I got to a stage where I was sick of walking and it was becoming a bit harder than it used to be. I had this bike for quite a few years so I decided to ride it and I found that the exercise was better for my knees. We need to take notice of what our body is saying, and try and analyse what’s happening and get the benefits out of anything like that.

I’m an outside person, and I’m always outside doing something. And so, I’m walking from the house to the shed, from the shed to the garden, so I’m exercising all day.”

3. Adapt To Circumstances And Accept Help If You Need It –  “I can remember my mother, when we said to her, ‘you can’t look after yourself anymore.’ For a start she just looked so demoralised, but she adapted to it, and I think that’s what we’ve got to learn to do. We’ve got to learn to adapt to the situation.”

Accepting that you cannot do all the things you used to be able to do, is a difficult thing. But the key to overcoming this according to Arthur is being positive and optimistic.

“Don’t complain too much. As much as possible we need to make the best of the situation we’re in. Don’t look for the negatives. Look for the positives.”

4. Keep Learning – “I don’t care how old you get, when you stop learning you’re going backwards. That’s one of the secrets to staying young.”

Arthur is still learning in any way he can. He learned gardening by doing his own research online, something that many people his age wouldn’t know how to do. Arthur told us “It’s not a good idea to let technology get ahead of you. I’m not crash hot on the computer but I’m trying to keep up with technology to my ability.”

Arthur also shared his philosophy on learning from your mistakes. We should acknowledge that we are all going to make mistakes, but it’s in learning from those mistakes that we grow as people.

“If you have a close shave, analyse it so it doesn’t happen again.”

5. Forgiveness – Arthur stressed the importance of family. He is one of four children, has one son, and a wife who recently passed away.

“As much as possible try and be part of your family. A lot of times it entails a lot of forgiveness, but that’s something we’ve got to learn to do is forgive and move on.”

Holding on to resentment, or negative feelings or stress is detrimental to our health. By being able to forgive, we are actually taking a step towards a healthier life, both emotionally and physically.

Comlink Australia is a strong advocate for people remaining independent as much as possible as they reach old age. And the services Comlink Australia offers are designed to assist people to remain active and healthy, rather than reliant. When asked what Arthur thought about Comlink Australia, he said the following:

“I think Comlink Australia is a marvellous idea. They have so many benefits for people to help them stay living in their own home, which to me is a great idea. I don’t have to worry and think one of these days, very soon, I’m going to have to go into a nursing home. That’s not necessary. Comlink Australia looks after you as far as transport, cleaning, helping around the house and many other things. All those things you can get assistance for which help you stay in a place you’ve lived, you’re comfortable in and you want to stay in.”

“People say, ‘I’m over 80, I’ve got to expect to get all these problems.’ No, not necessarily. I notice that a lot with people younger than me. Friends of mine say, this getting old is no fun. Well I’m enjoying it. Because I’ve got health.”

Request a call back

Submit your details, and one of our friendly staff at Be: will get back to you as soon as possible.

Submit your details, and one of our friendly staff will get back to you as soon as possible.